Early internal combustion locomotives and railcars used kerosene and gasoline as their fuel. Rudolf Diesel patented his first compression-ignition engine in 1898, and steady improvements to the design of diesel engines reduced their physical size and improved their power-to-weight ratios to a point where one could be mounted in a locomotive. Internal combustion engines only operate efficiently within a limited torque range, and while low power gasoline engines could be coupled to mechanical transmissions, the more powerful diesel engines required the development of new forms of transmission. This is because clutches would need to be very large at these power levels and would not fit in a standard 2.5 m (8 ft 2 in)-wide locomotive frame, or wear too quickly to be useful.

The first successful diesel engines used diesel–electric transmissions, and by 1925 a small number of diesel locomotives of 600 hp (450 kW) were in service in the United States. In 1930, Armstrong Whitworth of the United Kingdom delivered two 1,200 hp (890 kW) locomotives using Sulzer-designed engines to Buenos Aires Great Southern Railway of Argentina. In 1933, diesel–electric technology developed by Maybach was used to propel the DRG Class SVT 877, a high-speed intercity two-car set, and went into series production with other streamlined car sets in Germany starting in 1935. In the United States, diesel–electric propulsion was brought to high-speed mainline passenger service in late 1934, largely through the research and development efforts of General Motors dating back to the late 1920s and advances in lightweight car body design by the Budd Company.

The economic recovery from World War II caused the widespread adoption of diesel locomotives in many countries. They offered greater flexibility and performance than steam locomotives, as well as substantially lower operating and maintenance costs. Diesel–hydraulic transmissions were introduced in the 1950s, but, from the 1970s onwards, diesel–electric transmissions have dominated. 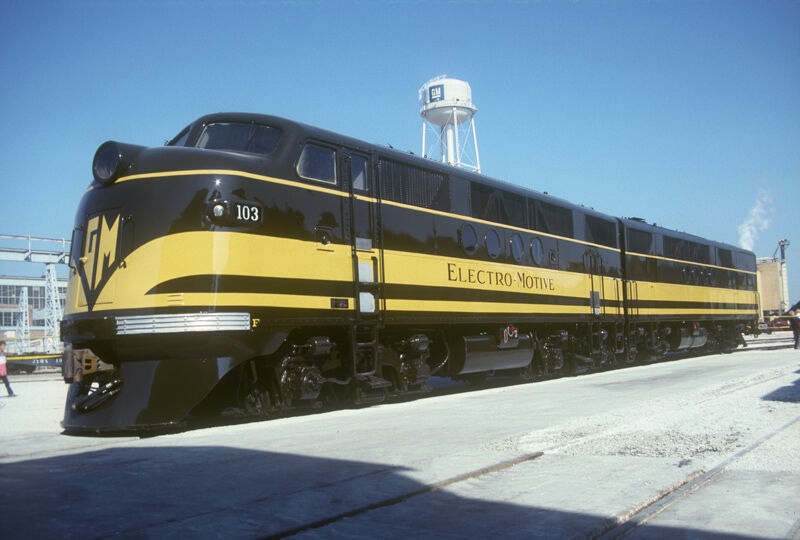 The earliest recorded example of the use of an internal combustion engine in a railway locomotive is the prototype designed by William Dent Priestman, which was examined by William Thomson, 1st Baron Kelvin in 1888 who described it as a “[Priestman oil engine] mounted upon a truck which is worked on a temporary line of rails to show the adaptation of a petroleum engine for locomotive purposes.” In 1894, a 20 hp (15 kW) two-axle machine built by Priestman Brothers was used on the Hull Docks. In 1896, an oil-engined railway locomotive was built for the Royal Arsenal in Woolwich, England, using an engine designed by Herbert Akroyd Stuart. It was not a diesel, because it used a hot bulb engine (also known as a semi-diesel), but it was the precursor of the diesel.

Rudolf Diesel considered using his engine for powering locomotives in his 1893 book Theorie und Konstruktion eines rationellen Wärmemotors zum Ersatz der Dampfmaschine und der heute bekannten Verbrennungsmotoren. However, the massiveness and poor power-to-weight ratio of early diesel engines made them unsuitable for propelling land-based vehicles. Therefore, the engine’s potential as a railroad prime mover was not initially recognized. This changed as development reduced the size and weight of the engine.

In 1906, Diesel, Adolf Klose and the steam and diesel engine manufacturer Gebrüder Sulzer founded Diesel-Sulzer-Klose GmbH to manufacture diesel-powered locomotives. Sulzer had been manufacturing diesel engines since 1898. The Prussian State Railways ordered a diesel locomotive from the company in 1909, and after test runs between Winterthur and Romanshorn the diesel–mechanical locomotive was delivered in Berlin in September 1912. The world’s first diesel-powered locomotive was operated in the summer of 1912 on the Winterthur–Romanshorn railroad in Switzerland, but was not a commercial success. During further test runs in 1913 several problems were found. After the First World War broke out in 1914, all further trials were stopped. The locomotive weight was 95 tonnes and the power was 883 kW with a maximum speed of 100 km/h (62 mph). Small numbers of prototype diesel locomotives were produced in a number of countries through the mid-1920s.