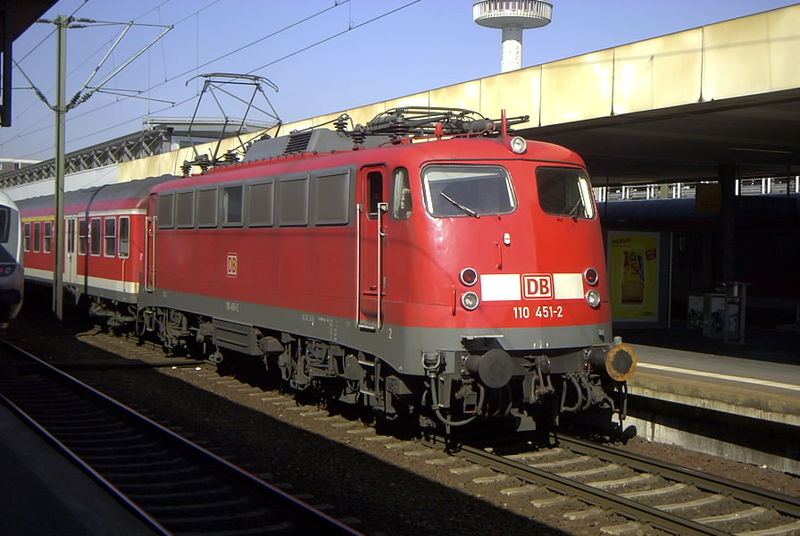 The first serial units went into service in 1956 and started with number E 10 101 (class E 10.1). As opposed to class E 40 these units were equipped with a rheostatic/regenerative brake, which also accounted for the difference in the roof design between the two classes. Starting in December 1956 a total of 379 locomotives in several series were delivered by the manufacturers (Krupp, Henschel, Krauss-Maffei (mechanical parts); Siemens, AEG, BBC (electrical parts). Starting with E 10 288 the new body used with E 10.12 (see below), the so-called “crease” (Bügelfalte) type, was also applied to all regular E 10 machines. Thereafter these locomotives were sometimes designated as class E 10.3. One locomotive (designated 750 001) served as a service locomotive for the Central Office of the German Federal Railways in Minden (BZA Minden, or Bahnzentralamt) from 1989 to 1996. The earlier units up to E10 287 became E10.1, then 110.1 in 1968; they were nicknamed “Kasten”, for box.

The service spectrum of the (since 1968 as class 110 designated) locomotives was shifted more and more to local/regional service by the 1990s. As part of this shift, during the third stage of the Bahn reform program the locomotives were assigned to the local service branch DB Regio, which practically meant the end of their service in the express area. In order to use the machines more efficiently in regional service, from 1997 many of the units were equipped with push-pull train controls, partly using components of class 140 and class 141 units that were retired.

Originally the class E 10 units were delivered in cobalt blue express train livery, the blue indicating that they were cleared for a maximum speed of 140 km/h (87 mph) or more. Starting in 1974, as part of other maintenance, the new ocean blue/beige colour scheme was applied to the locomotives. From 1987 the (then-current) orient-red was used, which was then substituted, starting in 1997, with the traffic red (verkehrsrot) concept, which is the current colour of all active locomotives of this class, barring a few exceptions.